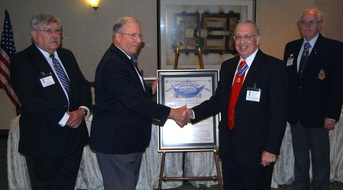 The Society of the War of 1812 in the State of Missouri was officially re-chartered on Sat., Aug. 7, 2010 in Columbia, Missouri at the Courtyard by Marriott Hotel.  Organizing President Russell F. DeVenney, Jr. (third from left) organized and chaired the meeting which was well attended by national officers and charter members from around the state of Missouri.  The national officers of the General Society of the War of 1812 present were President General M. Hall Worthington, Jr. of Crownsville, Maryland (second from left), Deputy President General Lawrence King Casey, Jr. of Beaumont, Texas (right), and Secretary General E. Paul Morehouse, Jr. of Akron, Ohio (left).

In order to form a chapter and receive a charter, there must be six members.  Two chapter charters were presented on Aug. 7, 2010.  They were the Ira P. Nash Chapter of Columbia and the Captain Daniel Morgan Boone Chapter of Kansas City.

The first chapter charter was presented to the Ira P. Nash Chapter of Columbia.  Nash was a veteran of the War of 1812 who is buried in Missouri. Not only is he the ancestor of the chapter’s first president, James S. Cunningham, but he was one of the early pioneers of what is now Boone County having acquired a Spanish land grant on the banks of the Missouri River.  He was a graduate of the University of Virginia, a medical doctor, surveyor, farmer, livestock dealer, and an “eccentric genius”.  The town of Nashville, Missouri in Howard County was named after him before the Missouri River washed it away.  Nash was buried standing up on a hill on his property overlooking the Missouri River and his neighbors.

The second charter was presented to the Captain Daniel Morgan Boone Chapter of the greater Kansas City area.  Boone was also a veteran of the War of 1812 serving as a spy patrolling the frontier. He oversaw a company of Missouri Rangers and served in the territorial militia.  In many ways he was like his famous father, Daniel Boone, as an explorer, trapper, and surveyor.  Daniel Morgan Boone was not only the first Boone to step foot in Missouri, but he is thought to be the first white person to step foot in what is now known as Jackson County.  With his Spanish land grant, he first settled on land near Matson, a community south of Defiance.  He then settled in Jackson County for a short time before moving to the Kansas Territory, though he returned to live out the last days of his life in his Jackson County cabin.  He is buried in Boone-Hays Park on 63rd Street between Brooklyn and Euclid Avenues.

The third chapter chartered within Missouri was presented to the Major Nathan Boone Chapter of Springfield in the log cabin home built by Nathan Boone in Ash Grove.

The fourth charter was presented to the General Daniel Bissell Chapter of St. Louis at the third annual Society of the War of 1812 in the State of Missouri meeting on Sunday, 28 Apr 2013.